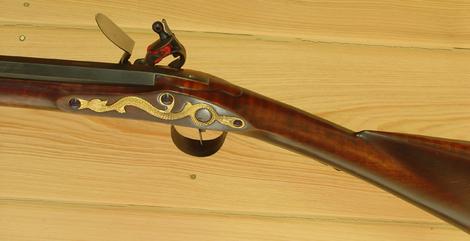 The Wilson stylized torch finial with engraving of bow/quiver/arrows, which is also on the lockplate.

Close up of finely detailed dragon style side plate. 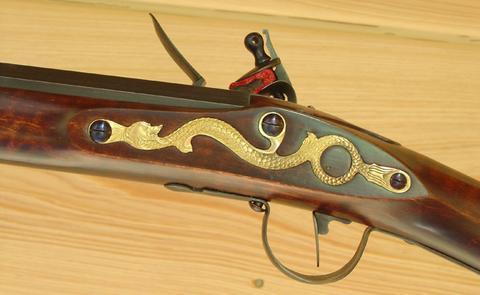 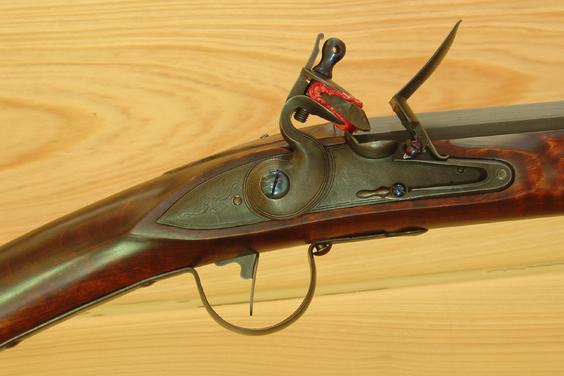 As the name implies, this style of firearm was manufactured for the “Indian” trade in North America and elsewhere. The typical “trade gun” was a smoothbore flintlock with a simple pull trigger. The elements of this simple style gun allowed easier production when such large numbers of firearms were required. Early English style trade guns featured a straight wrist, comb, belly line and simple strap butt plate. Bore sizes generally ran from about 16 gauge down to 28 ga, with the predominant gauge being about 24 ga., roughly equivalent to .58 caliber.

As competitors with the French for the native Indian trading and warring allies, the English established trade routes

competing with French voyageurs to reach the inner areas of this continent.

The different Indian tribes all eagerly sought out traders with firearms and some thought French trade guns were of higher quality. Responding to this trade threat, the English builders changed the stock architecture from the straight English stock architecture (as described above) to the French architecture and a French style butt plate replacing the strap style butt plate. In essence, this fooled the Indians into accepting the English guns as the desired, higher quality French guns. The English did indeed respond and build higher quality guns when the Indians demanded it. The standard trade gun barrels, with 7-8 inch octagonal flats transitioned to a round taper, were retained for the manufacture of these firearms.

Richard Wilson was an English firearm manufacturer working from 1729 until 1751. He designed the Chief’s Grade Trade gun to fit this new demand and actually improved the lock quality by incorporating an internal bridle to keep the parts aligned. The new improved lock and a “stock free from knots and cracks” were 2 of the improvements made to help the competitive trading with the French voyageurs. Although trade guns were not dated, from records showing Wilson’s active years, we can accurately date this gun in the pre-French and Indian war era.  Wilson’s sons took over the manufacturing after Richard Wilson retired and continued the family tradition. For a documentary Wilson trade gun picture, refer to “Colonial Frontier Guns” by T.M. Hamilton, pages 78 and 79. This gun is referred to as the O’Connor gun.

The beauty, functionality and charm of these light powerful guns is still reflected in modern times with many shooters preferring these versatile old smoothbore styled guns to compete with, hunt with and carry whenever the opportunity arises. They may be called just “trade guns”, but the value of these types of firearms to handle shot or round ball shooting is still appreciated.