The English Game gun has a palm swell and sling swivels as standard features.

All English fowler pattern firearms are offered in right and left hand versions. The English Game gun weighs about 5 lbs. in .54 caliber.  Also available in 28 gauge smoothbore. I can also build this 30 inch version gun with the octagon to round barrel configuration which can utilize the 6 barrel interchangeable system. It's a little heavier version but gives the availability of using the 20 gauge barrel which can be jug choked. Lots of options with this gun folks!!

​​​​The English Game Gun features a double taper, 30 inch round barrel. This light powerful gun comes in .50, .54 and 28 gauge smoothbore in this barrel configuration. This gun can also be built in an octagonal-to-round version allowing the use of the 6 barrel interchangeable system. This barrel configuration features a smoothbore as large as 20 gauge which can be jug choked for greatly improved performance with shot and round balls. Though it's a slightly heavier version, it does offer more versatility in bore choices.

The gun comes standard with sling swivels and a palm swell. This English fowler stock architecture is extremely shooter friendly resulting in comfortable all day shooting with no sore cheekbones!

All in all, it's a super fine little carry gun which will do the job on any game animal.

This gun also comes in a 12 gauge/.62 caliber rifled barrel configuration. This version also features a double taper round barrel for really large, tough game and of course in the 12 gauge version---weighs less than 5 lbs.! 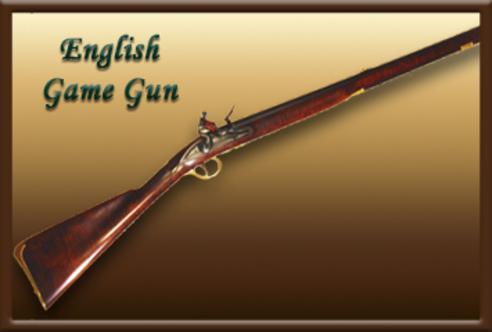 The lock is 5.5 inches, with a large, flat water resistant pan and front and rear drains. It features a finely beaded round face plate, hammer and frizzen.