Flashguards for our line of right-handed and left-handed guns; Michael Lea, 614-291-4757. 2109 Summit Street, Columbus OH., 43201. Mike also has black English flints and also French amber flints. Mike said the French flints are really nice and about the same price as black English flints. Give him a call and he'll be glad to fix you up.

Curly maple stocks; www.HarrisonGunStocks.net. Freddie sells very nice wood and will try to get just the right blank for your next gun. He has stocks up to $700, so you can get some of the most beautiful wood on earth from him.

Please be advised that installation of a touch-hole liner will void any and all warranties.  We cannot work on a barrel which has a touch-hole liner.  The only solution to any problem encountered will be to replace the barrel.  Touch-hole liners are unnecessary and they ARE DANGEROUS.

After years of use, with gas erosion/powder corrosion and replacement-removal wear, the threads will no longer hold the liner in the barrel and it WILL BECOME A PROJECTILE WHICH CAN KILL OR MAIM A BYSTANDER.

Your gun will not ignite faster with a touch-hole liner.  A properly coned touch-hole will ignite almost instantaneously without any problems that are associated with liners.  Please be advised not to stand next to any shooter using a touch-hole liner in any gun.

We commonly hear of fouling problems encountered by black powder shooters and have researched the problem in depth.  The use of any petroleum product (oil) in your bore will cause undue fouling.  The reason petroleum/oil doesn't work is that it scorches at about 450 degress and black powder burns at about 900 degrees; the result is scorching! Oil and other petroleum products are introduced into the bore during machining and will invade the pores of steel.  Black powder and scorched oil are incompatible and create large amounts of hard-to-remove fouling.

THEREFORE, WE ADVISE BLACK POWDER USERS NEVER TO INTRODUCE ANY PETROLEUM PRODUCT INTO THE BORE OF THEIR GUN.

We strongly recommend using the lubes on the market and seasoning your barrel.  There will be extensive fouling when the lubes are first used, but as the fouling is removed through cleaning and shooting, the oil is being removed from the pores of the steel.  This process is called seasoning and will take anywhere from 50-150 shots to accomplish.

We provide this service in each kit or gun we sell; the bore of your gun will be scoured and heated to remove as much petroleum product as possible.  We will then treat it with a lube to get your seasoning process started.  Just load using lubed patches and clean between shots using light moistened patches to help remove fouling.  Remember to insert a touch-hole pick after each cleaning to remove fouling from the vent area.

If you experience slow or inconsistent ignition, it is caused by the fouling build-up on the breech plug.  Either scrape the breech plug with breech plug scraper or clean thoroughly to remove the build-up.  Then continue shooting several shots as the barrel gets seasoned.

When the barrel is purged of oil, your gun should shoot and load almost effortlessly.  Clean-up will be much easier and you can use the lube for shooting or hunting.  Cleaning with water or soap and water will remove the fouling.  Then just run lubed cleaning patch down the bore for rust protection after the bore is clean.

We use "Old Swamp Hunter" or natural liquid lube like olive oil, or peanut oil.  The lube and a compatible bore cleaner can be purchased by calling 1-800-890-9797.  Any of the lubes without petroleum will accomplish the seasoning and you can choose whichever product performs best.

You can also use olive oil, vegetable oil or any natural oil like bear oil. That's what I use and it works great. Bear oil also won't contaminate your powder, strangely enough. Getting the bear to give up the oil is the rub of course...

1. Can I order a custom pull length? (updated 5-19-2015)
Our Standard pull-length is approx. 14 inches depending on the model.  The Northwest Gun can be ordered in a blank butt stock version which will allow the builder to customize pull-length from 12 1/2 inches to 15 1/2 inches. On the Northwest gun, we will also custom fit the pull length for younger shooters and women, for an additional charge.  The flat butt plate with a simple beaver-tail finial is fairly easy to install for those desiring different pull lengths. We can shorten, to custom pull length, our English Fowler pattern guns for an additional cost of $100. New; The Southern Mountain Rifle is available with custom pull lengths from 12.5" out to 15.25". We can alter the pull length on any model of gun we produce although an additional labor charge is required for the custom work.

2. Can I get a better grade of wood? (updated 5-19-2015)
We will supply you with any grade of wood desired. We base our selection of the stock on the amount of money the customer desires to spend. You may specify an extra dollar amount up to $500 extra and we will strive to give the you more than your money's worth. You may choose any amount from the $25 extra on up. English walnut is no longer available due to the health risks created by particles when working and sanding. An additional down payment may be required for custom ordered wood.

3. Can I get my gun browned?
We build French and English origin guns and they weren't browned on a production basis until around 1770. We only supply  blueing for kits and assembled guns. Factory built guns are either blued or left bright.

4. Can I get a warranty on my kit?
We have no control over kits or assembled guns once they are shipped from the factory and cannot warranty the guns. We do guarantee our parts and if something is deemed unsuitable by the customer, he may return it for replacement (before tampering). All factory finished guns are lifetime warranted because we have control over all aspects of the building of the gun.  We also completely seal the gunstock by submersing the stock for 20-24 hours in a tank with a hardening, penetrating sealer.  The sealer prevents any moisture from entering the wood, which can cause warping, twisting, shrinking and expanding.  All of the barrel tenons are slotted so that as the barrel heats up from shooting, it stays relaxed and will shoot to the same point no matter what the temperature or humidity.  You can be assured that we have spared no effort to build a long-lasting and dependable firearm.

5. Do you require a down payment when I order a gun? (updated 5-19-2015)
We do require a $300 down payment when ordering a gun. If you special order a higher grade of wood, we might ask for an additional down payment. We will put you on a waiting list and contact you to confirm the specifications and shipping instructions. If you still want the gun, you can send either  personal checks or money orders and we will ship your kit in 2-3 days after receiving payment. Assembled guns are shipped 7-10 days after payment is received and finished guns take 3-4 weeks. A possible additional down payment may be required for extra premium wood ordered and built into a semi-custom gun according to customer specifications.

6. Do you have any guns in stock?
Yes, we quite often have guns in stock, so the customer may call and inquire as to what is currently available. We also have current guns on the "Available Now" page which is updated frequently.

7. Can I buy the French pistol in kit form?
We will now sell the pistol in kit form for builders who wish to do the work themselves. It requires some skill to complete, however. It is available with English walnut for $50 additional.

8. Can I get different barrels to fit my gun later if I need to?
Yes. We have an interchangeable barrel system and by keeping the outside dimensions constant, you can acquire a different gauge or caliber at any time. .62 caliber rifled barrel is now available for the 12 gauge English fowler. It is much easier to order and build interchangeable barrels at the time of building, but they can be ordered later and factory fitted later with an added shipping charge of $65.

​Aluminum cases up to 64" long, bbsportsman@netnitco.net or Ron Rich at www.casesbymasco.com. We just bought two custom made cases for the Crockett rifle and these cases are not only beautiful but well constructed and priced right. I think they keep 62 inch cases in stock. We custom ordered for the Crockett  rifle and they will custom build to your specs., too. Call Ron Rich at 1-800-772-1960 x 26 and he'll fix you up. We really recommend these cases; lockable. Not that any one would want to steal our junk, but you might have some nice guns you want protected!

Danny with a doe taken with the David Crockett Rifle.

If you have an issue or question about your black powder gun, Please review  the information below first, then call if additional information is needed. 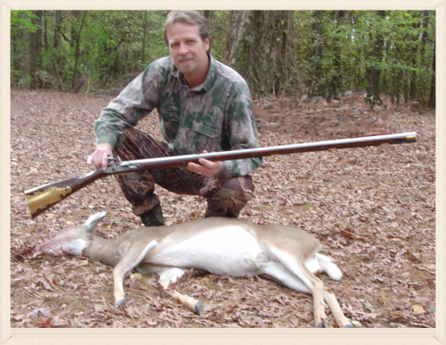