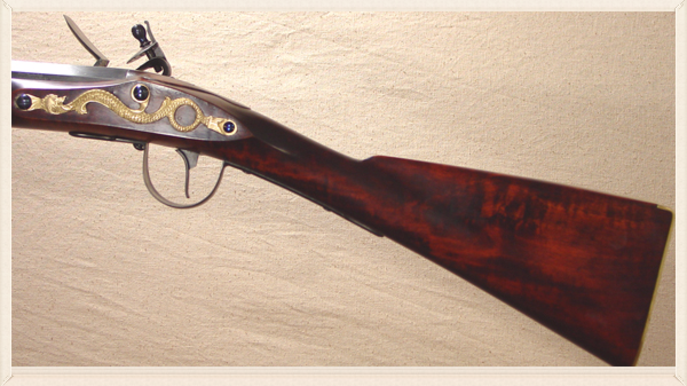 The Northwest Trade Gun came into existence in approximately 1770. It was largely derived from the earlier Wilson trade gun

and was built in huge numbers of guns for the trade all over the world, but especially North America.

It featured a large "bow" trigger guard, supposedly for the Indian trade. The theory was that the natives were used to using

I don't know if that was true, but that is the prevailing theory. I think the ability to get gloved/mittened fingers into the guard would

have been just as advantageous to people living in harsh conditions.

There was a large variation in the quality of guns built. It depended a lot on the skill of contracted gunsmiths to deliver

the firearms quickly since there was a seemingly never ending demand for these most valued of trade items.

typical short octagonal flats on the barrels. The locks were mostly unbridled on the frizzen until about 1815 or so when that

improvement came into more common usage on these type of guns.

Options on the Caywood Northwest Gun include either screwed-on or nailed-on butt plates, bridled or unbridled frizzens and

barrel lengths of 24", 36" or 41". Can be fitted with a rear sight and sling swivels also. Left and right hand versions are available.

They were using guns and the Indians customized them to a great degree to suit their own tastes and needs. Needless to say, the light powerful trade gun was a great improvement over bows and arrows, but it never completely replaced the bow since powder, shot and ball could be hard to come by in frontier circumstances. They were ordered in a variety of barrel lengths, but 40-42 inches would have been the most common and useful.

From reading old accounts & journals, the most common bore size seemed to be a bit smaller than 20 gauge, possibly in the 24 gauge range.

It made sense because these guns could shoot shot or roundball & the bigger the round ball, the fewer the shots you could get from a pound of lead!

When you're carrying everything you own, weight would seem to be an overriding factor in making that decision.

The Northwest Trade Gun was still being built and traded to South American natives in the 20th century and I'm sure there are still native, primitive cultures still using these firearms for subsistence!! These guns represent a long and varied presence in the settling of the west and of course in helping to establish trade routes across North America during some of our earliest explorations.