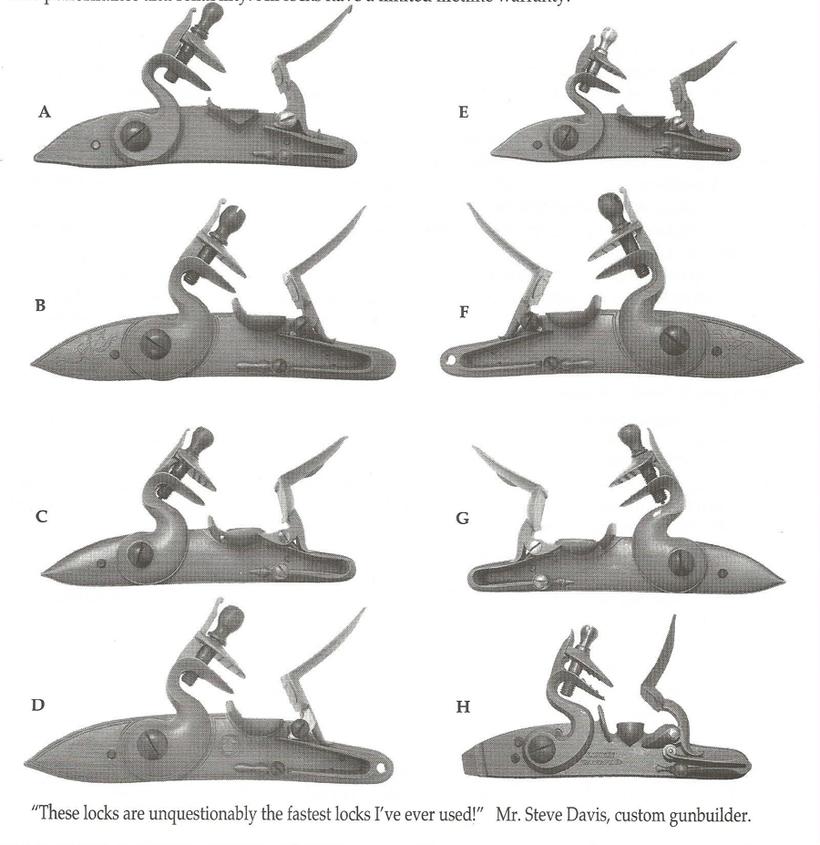 LOCK DISASSEMBLY INSTRUCTIONS- Place hammer in full cock position and place mainspring vise on spring. Release hammer forward by pushing up on sear bar. Remove spring. Cock hammer to expose sear spring screw and remove screw and spring. When dealing with the sear spring screw, the screw must be either in or out BEFORE releasing hammer. Failure to give adequate clearance from screw sticking up while releasing hammer will BREAK OFF the shelf on the tumbler and void warranty! Remove bridle screws, sear and bridle. Note that there is a dot on the fly, which must always go up for proper operation.

After removing hammer screw, place 1/8" punch into the tumbler hole and tap gently to remove tumbler from hammer square.

TO RE-ASSEMBLE LOCK, place supplied brass plate over the tumbler axle, after placing the tumbler square through plate into the hammer. Gently place padded lock ( to avoid defacing hammer's front surface) in bench vise jaws, making sure that the parts are square. Slowly close vise jaws to press the hammer onto the tumbler square. Again, make sure that when re-assembling internal parts, the sear spring screw is either in or out to prevent breaking shelf off of tumbler. Replace internal parts and then replace mainspring last.

Shipping on locks is $10 and additional $2 per extra lock.

These locks are purpose built; in other words, they were designed to be used on specific guns of a particular origin. It's not correct to use Germanic locks on English or French firearms etc..Though some of these can be used generically. For instance the Wilson lock can be used on early Virginia style guns, the Englich fowler lock can be used on early American longrifles etc. and still be correct, since many of the European locks were imported for use over here. It's always better to use a French lock on French guns and English locks on English guns. It is important to remember though that almost any lock could be used on American guns, since so many were imported and some taken from used-up guns and recycled.