A fine 21 pound gobbler with a 12 inch beard, taken with 12 gauge English Fowler. 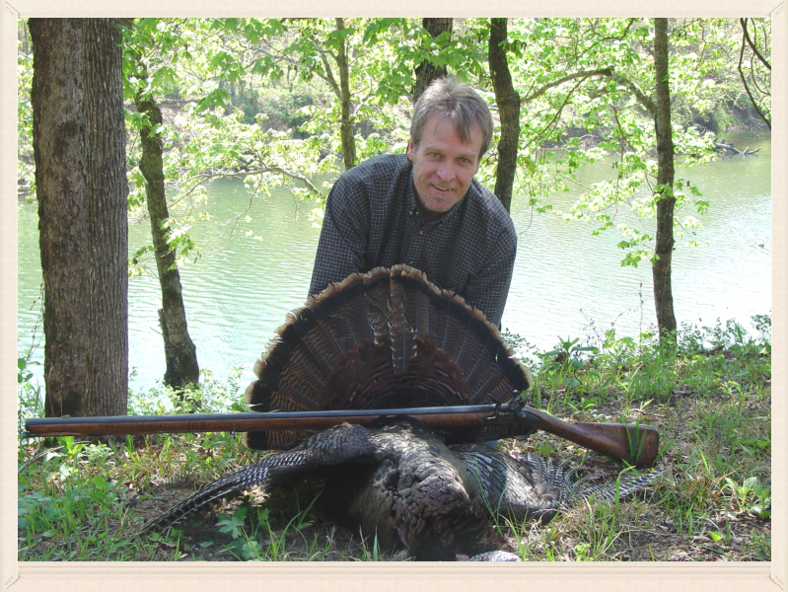 In response to customer questions  mentioning  touch hole liners on other websites, I would like to offer a few points of interest. With the exception of English guns which had un-removable plugs, liners are not  historically correct. These modern removable touch hole liners have the added risk of being un-seated from their threads and becoming a deadly flying object. Not to mention looking horribly out of place!  How do you  perfectly clean the  inverted cone of a touch hole liner in field conditions? You don't. The reason most builders don't use the outside cone method is because the barrels they use are made of leaded steel, which will erode fairly easily. Caywood guns use modern high carbon steel, which is not only  far safer from a pressure standpoint, but won't erode. If you've heard of barrels bursting at the breech area, you're probably hearing about a barrel in which a touch hole liner was installed. I use the outside cone method for three reasons; 1. It's safe. 2. It's historically correct. 3. It works.

I've heard the supposed claims of faster ignition by using touch hole liners. If fast ignition, not historical correctness is your absolute goal, please contact Remington or Winchester for  a complete catalog of high power centerfires. Those are fast! If you want great performance that's reliable, safe, trouble-free (as much as an 18th century firearm can be)  and historically correct, use the outside coned touch hole. We shoot clay birds with our flintlocks, not to mention all manner of still targets. We compete with them and hunt in all kinds of weather using only flintlocks. If we do our part to keep the breech clean and the touch hole clear, the ignition is almost instantaneous. We are shooting and recreating the era of 18th century guns after all.
One of the selling websites recommended that you put a touch hole liner in one of our guns to speed up ignition. The installation of a liner will void all warranties and I cannot work on a barrel that has a liner in it. The  inverted cone of the liner will be halfway into the breech plug. This will expose the threads of the plug to rusting and make the liner very difficult to clean. I do not recommend putting a liner in our barrels.
I  would like to offer a thought about the opinions of those experts who don't build guns: If you wanted to find out about the performance of a particular automobile, would you ask some guy on the street who'd seen one drive by, or would you go talk to a mechanic who actually works on them?