In reading about recommendations for loading shot in smoothbores, we often come across references to the use of fiber wads, felt wads and heavy over-powder cards.  Far be it from us to pretend that we know it all when it comes to shooting shot loads. However, it seems to be clear and reasonable when you stop and consider this; if the component over the powder is heavier than any individual shot pellet, it is very possible that the heavy component will overtake the shot charge after it leaves the muzzle and hit it. This quite often results in splotchy patterns or donut hole patterns. Sound familiar? If you've suffered this occurrence, here is a loading tip that might help put a longbeard on the table. This pertains to cylinder bore guns, but can be used in choked guns also. We recommend using  only over-shot cards on the POWDER charge, if you want a tight pattern . The reason is that the light cards, say 3 or 4, seal the gases upon ignition and as they exit the muzzle, being light, they don't follow the charge and disturb it. They tend to go to the sides and leave the charge flying straight. If you desire a tight pattern for turkeys, purchase either nickel-plated, copper-plated, bismuth or any other HARD shot (not steel) of your choice. The reason for hard shot is this. If a round pellet stays round, it will fly straight. And by extension, 500 round pellets will fly straight if they stay round. When they get flattened or mis-shaped by the crush of the powder igniting, they will not fly straight and you will get many flyers. Bismuth may be the best because it is almost as dense and heavy as lead shot and almost as hard as steel. So it has the penetration of lead, but stays round for true flight to the target.

As you may know, I jug choke smoothbore barrels for optimum pattern density and it simplifies working up a good load greatly. However, if you're dealing with a cylinder bore barrel, in other words no choke is present, this will make your loading procedure much more efficient.

The suggested loading procedure for maximum pattern density is this;

Using your shot dipper as a powder measure, pour down a set amount ( example; 1 1/8 oz of volume for a 20 ga.),  then seat 3-4 overshot cards on the powder to pack it and push out any air. Then take a single overshot card and push it down the bore approx. 3 inches. Now, take that same volume of shot, as used for the powder measuring, and drop it down onto the card where it will be visible. Then take a dipper full of cornmeal  muffin mix ( not straight corn meal) and drop onto the shot. Tap the side of the barrel ( keep head and eyes from in front of muzzle!) until the shot works it's way to the top and the cornmeal has worked down into the shot charge. This will provide a buffering element so that when the powder ignites, the shot will push against the meal not the other shot pellets. Then place one overshot card on the shot load and seat it on the powder. The reason to use the muffin mix and not the straight corn meal is that there are sugars and fats added to the mixture that aren't present in the straight corn meal. Apparently, these pack somewhat and allow the charge to be bunched up for short distance from the muzzle, helping to give you a great pattern. We recommend using no. 7 or 7 1/2 size shot for turkeys for the pattern density. These size pellets will penetrate a gobbler's skull at 26-28 yards which is about as far as one should shoot at a turkey with a cylinder bore gun anyway. If this load does not give you a good pattern, try using one less increment of powder as thrown by your shot charger, so that you are using just a little more shot . If you are using choked guns, you can go to the bigger shot sizes. By all means experiment with your gun to see which loads pattern best for THAT PARTICULAR GUN. Sometimes, a gun will throw a better pattern when LESS shot and powder are used. And by using the corn muffin mix when you shoot a turkey, the bird is already smoked and breaded and ready for the frying pan when you pick it up.

GOOD HUNTING AND BE SAFE! 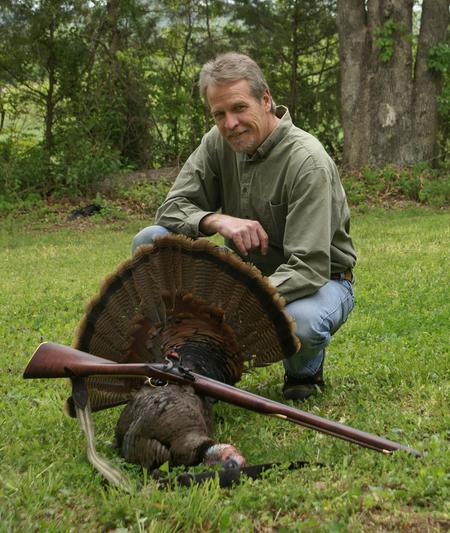 Here's a fine gobbler I took with a right hand 12 gauge English Game gun. The gun was jug choked and shot a great pattern. I also shot nice buck with the interchangeable .62 caliber rifle, although I can't find the picture. I spotted and stalked him within range and put a ball perfectly into his ribcage...more fine vittles!