Back to Daily Weekly updates.

The Arkansas rifle season started on Saturday (Nov. 11th) and I had trudged up Hell Mountain (at least that's what I call it) near Eureka Springs to one of my favorite spots before first light. I got set up and about 45 minutes later, a REALLY nice 8 pt. buck came in to about 25 yards and I PASSED HIM UP!! I thought there was a bigger buck in there, but only saw another 6 pt., which I also passed on. I sat there until noon the next day and only saw a tiny spike. 2 trips up Hell Mountain and nothing! One reason I passed up the first buck is I thought I had a pretty good buck at my house, too, so I hunted there on Sunday afternoon. I had a small  buck come trotting down a cut in the trees and head into the thick cover. A little while later a doe came out and looked back at the cover on the other side of the cut several times, which made me think there was another buck in there. Pretty soon, here came the first buck back and he followed the doe into the same spot where she'd been looking. I saw several other small bucks, but not the big one, so I eased out of there with a plan.

Next morning I was easing up to a stand which was only about 75 yards from where I'd seen all the hot doe activity. I was at the same place where I'd hunted the day earlier and I heard a VERY SOFT grunt. I eased up to get a better view of the area and pulled my gun up  and supported it on my stalking stick. I stood there for a long time and finally saw a small buck emerge from the thicket, then the doe came out and both fed around. Knowing she was still there, I decided to just sit it out and wait to see what would happen. She went back into the thick stuff again and the small buck left too.

Soon after, the doe emerged again and started feeding again. I had stopped about 35 yards away from all this activity and was thanking my luck I hadn't been smelled or seen yet!! I heard some brush popping in the thicket and glimpsed a very nice rack bobbing around in there! Even though it was pretty obstructed, I knew this one would prompt me to throw some sparks if he walked out. The doe crossed the cover cut and walked out of sight so I got ready thinking he might ease out and have a little look to where she'd gone. He didn't ease out! He came walking out fast and didn't stop as he crossed my little open spot! If I hadn't been ready with my gun up and aimed, I would never have had time to get the gun up and make a shot! I got on him instantly and let the shot go before he jumped and ran off. He only went about 40 yards before going down luckily. And luckily is right, since I'm suffering pretty severe joint/muscle pain from tick disease of some kind. I pulled him out with my 4 wheeler and saved my shoulders the stress! I guessed him as a 4.5 year old buck and he was heavy horned and big  bodied. Measured 20 inches right under the chin! He had broken off a point a while back from fighting, so there was another buck around big enough to give him a fight!

That LIGHT, little English Game gun is a wonder for hunting deer in these kinds of situations! Trying to hold a heavy rifle for long periods of time is very difficult if not impossible, even with a stalking stick to hold on to. For a rifle that weighs only about 5 lbs, it is very powerful and handy for these big bucks. Since that was the 2nd buck I'd taken, I'm tagged out and back to work, HAPPILY! Call for my email if you'd like to send YOUR successful hunt pictures. Cheers to you guys/gals and good hunting! 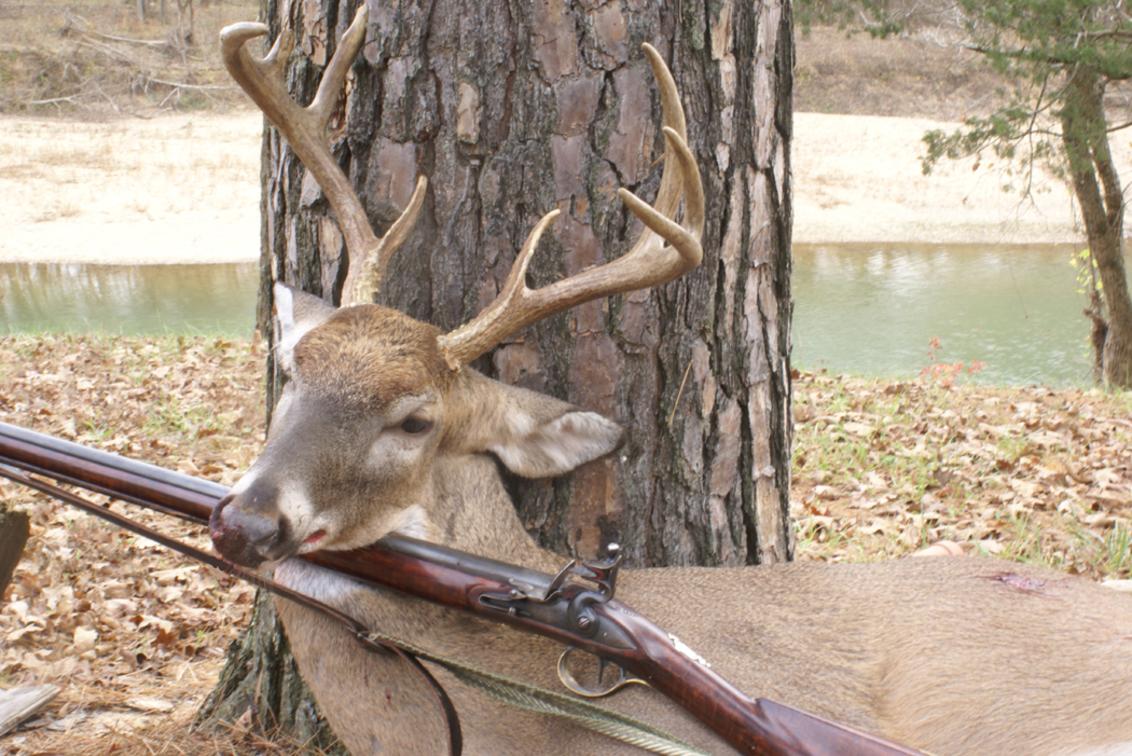