Back to Daily Updates 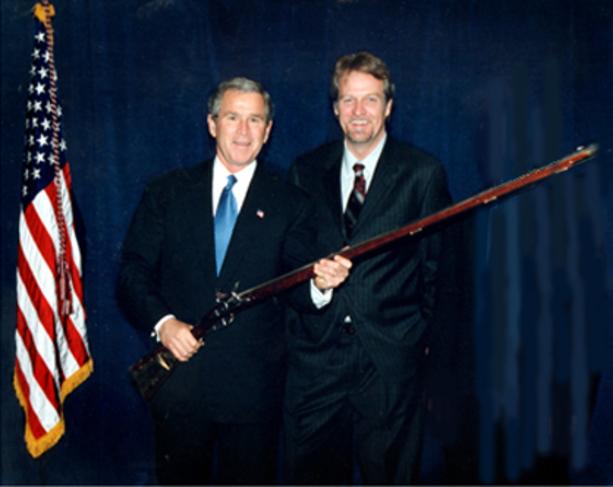 Back to Dan's Tips

Introducing a new website feature with magazine articles, hunting articles and articles of general interest for the muzzleloading enthusiast. Click links below for more stories!

Here's a  short bio of Danny for those who are unfamiliar. I'll try to keep it short and sweet and give you the high spots. I'll be posting more links to pages below as I get time.

Danny Caywood was born in 1955 in Pittsburg, KS with black powder in his veins. He grew up in Joplin, Mo. and began shooting black powder at a very young age, taking up

the flintlock at 13.  His father, the infamous  Charles Caywood, instilled in Danny the beautiful and functional aspects of muzzle loaders. Charles was an art professor and Danny had a natural interest in art that was promoted by the very artistic father. Danny started building black powder guns at  the age of twelve and was inspired by Kindig's Kentucky rifle book. Drawing, building guns, roaming the  local woods with homemade bows and arrows (and spears and slingshots) kept Danny occupied and only partially out of the workshop.

After college, Danny embarked in full time custom  American long-rifle building, along with knife making and scrimshaw. With an output of approximately 3500 pieces of scrimshaw, Danny's artistic abilities evolved into pen & ink work and painting. Wildlife art was a favored subject along with portraiture and mountain men. Danny has been honored to work for many notable individuals, including President Reagan, President Bush, Governor Mike Huckabee, Clint Eastwood, Kareem Abdul  Jabbar and Winthrop Rockefeller to name a few. Even while working with other art mediums, the love of gunmaking was never far removed. In 1992, Danny started building a modern factory to produce 18th century English and French firearms. It had always been difficult to keep up with orders when making custom firearms because of the extensive time spent on each individual piece. With a new modern factory built, the demand for large numbers of guns could be met. The great thing about building a new production facility was that we could maintain a very high quality product and cut out huge amounts of expensive hand work.  Affordable, quality guns with interchangeable barrel systems and fully engraved furniture have set a standard for the semi-custom industry and kept us busy ever since we began production. We truly appreciate our customer's desire to replicate the old ways and customs of our forefathers. Doing it the hard way with a flintlock brings satisfaction that just cannot be described and it gives us great admiration for our friends/customers who sign up for the tough path! We are committed to building the highest quality pieces and that ethic was instilled in me personally at a very young age by my father, Charles Caywood. He is still building fine custom guns almost 60 years after he began.

In 1992, Danny found a blueprint of David Crockett's first rifle by Houston Harrison. After many years of building production guns, Danny felt that he could successfully solve the inherent problems associated with duplicating a highly complex art piece. The wheels started turning in the effort to successfully copy a fully carved long-rifle on a production scale. With an extremely accurate duplicating machine already built and tuned, the dream became a reality. With numerous special tools, including jigs and fixtures specifically built to insure exact quality control, the Crockett rifle was finished after several years of painstaking development. "This gun means a lot to me personally, because I was first  inspired by American long-rifles", said Danny.  The American long-rifle is one of only a few uniquely American art forms. The gun is unique, not only because David Crockett owned it, but because of the exquisite beauty of the rifle. This rifle was built by an artist. When the original gun was dis-assembled, the painstaking care of the maker was apparent. "To be able to hold the rifle that David Crockett owned was an unforgettable thrill. To be allowed to take it apart and have the right to produce it was more than an honor. I hope that the efforts have produced a rifle that David himself would have been proud to carry."

I was very honored to present President G. W. Bush with the number 1 Crockett rifle pictured below in October 2002.

I also built a very fine stump wood English Officer's fusil for Arkansas Governor Mike Huckabee and went to the Governor's Capitol building in Little Rock to present it to him. Although we went turkey hunting with the new 12 gauge, the birds did their usual routine and easily eluded us. The Governor displayed the fine piece in the capitol Office while he was still governor.